In Memory of Taziff Koroma 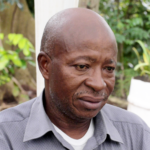 Momoh Taziff Koroma was born 19th April 1957 in the village of Baoma, Gallinas-Perri Chiefdom, in Pujehun District in Sierra Leone’s Southern Province. He developed a passion for languages at an early age due perhaps to his own mixed heritage, being of both Mende and Vai descent, and to the polyglot nature of the area where he grew up, a crossroads region in southern Sierra Leone near the Liberian border where many languages are spoken. During his long and active career, Taziff made wide-ranging contributions to the study of Sierra Leone’s languages and cultures, and to the development of language studies in Sierra Leone’s schools.

While attending St. Paul’s Secondary School in the town of Pujehun in 1973, Taziff met a young British scholar named Adam Jones, a VSO teacher who developed an interest in Sierra Leone history during his volunteer service. Taziff was Jones’ interpreter and assistant in 1974-75 when he began collecting oral history, and again in 1977-78 when Jones returned to Sierra Leone for more research for his Ph.D. thesis. The two men covered an enormous territory on foot and by motorcycle in the southeastern half of Pujehun District. Jones would later draw on this research for his book, From Slaves to Palm Kernels (1983), an early history of the Gallinas (or Vai) region. Taziff’s collaboration with Jones was an experience which he credited with launching his scholarly career. Later, Taziff attended Njala University College, where he earned his BA in Linguistics, and where he later lectured. He also earned a Higher Teacher’s Certificate (HTC) at Fourah Bay College and taught at a teachers’ college in the Bo area where his passion for language and oral traditions inspired his students. After several years of teaching, he returned to Fourah Bay College where he earned an MA in Linguistics under A.K. Turay and Joko Sengova.

Throughout his professional life, Taziff engaged in linguistic consulting work in a wide range of projects, from economic development efforts requiring linguistic acumen to missionary groups needing Bible translation in national languages. His most important consulting work, though, was for the Ministry of Education’s project to teach the national languages in Sierra Leone’s schools. Taziff developed textbooks at different grade levels in Mende and Krio which included well-structured language exercises and his own original stories. These materials are still used in some Sierra Leonean schools today.

Taziff also worked with foreign scholars who relied on his help as a translator and cultural advisor, and his name is cited with gratitude in many Ph.D. dissertations and published academic books. These scholars include Tucker Childs who documents endangered and disappearing languages, Philip Misevich who draws on linguistic evidence for his research on the history of the Atlantic slave trade in Sierra Leone, Padraic Scanlan who explores the abolition of the slave trade in Sierra Leone, and Konrad Tuchscherer who studies the indigenous Mende writing system known as Kikakui.

Taziff was also involved in two documentary film projects on the African diaspora – Joseph Opala’s Family Across the Sea (1990) and Opala and Cynthia Schmidt’s The Language You Cry In (1997). Both films document the historical and family ties between Sierra Leoneans and the Gullah people of coastal South Carolina and Georgia in the US, whose ancestors were taken from Sierra Leone and neighboring areas of the West African “Rice Coast” to North America in the 18th century. While working on The Language You Cry In, Taziff helped the filmmakers locate a village in Sierra Leone where a local family preserved an ancient Mende song first recorded in a Gullah community in rural Georgia in the 1930s. Many predicted that finding that song in Sierra Leone 200 years after an enslaved Mende person took it to North America would be impossible, but Taziff’s discovery that a word in the Georgia version of the song belonged to a particular Mende dialect helped narrow the search area in Sierra Leone.

Taziff’s last film project was Marcus Rediker and Tony Buba’s Ghosts of Amistad, for which he served as Associate Producer. The heroes of the Amistad Revolt, mostly Mendes and led by Joseph Cinqué (or “Sengbe Pieh”) were put aboard a slave ship in what is now Pujehun District in 1839. They would later stage their celebrated revolt aboard a ship called Amistad

in Cuban waters. Taziff drew on a lifetime of experience doing oral history research in the Pujehun region to tap local knowledge to locate the site of Lomboko, the slave trade complex where the Amistad captives were held before being put aboard the slave ship. Scholars had been aware of Lomboko from historical sources for a long time, but no one had been able to locate the actual site. Ghosts of Amistad received the American Historical Association’s John E. O’Connor Prize for Best Documentary Film of 2015. Taziff also contributed to Henry Louis Gates Jr’s The African Americans: Many Rivers to Cross (2013) which was broadcast widely on US television.

Taziff was one of his country’s foremost linguists, but he was also a patriot; and he made use of his writing skills and cultural knowledge to help heal Sierra Leone’s wounds after the rebel war through his work with the Truth and Reconciliation Commission (TRC). He authored several reports, including “Manifesto 99,” which recommended that the TRC employ indigenous modes of conflict resolution in its efforts to consolidate peace. The TRC disregarded his recommendations, though some independent projects later drew on indigenous beliefs and ceremonies for their own peacemaking efforts. Taziff also played a major role in drafting a summary of the TRC findings, which was absolutely necessary in his view if ordinary citizens were to understand the lessons of the rebel war. The Sierra Leone Government did not intend to compile a summary, but Taziff was able to find funds for that purpose by appealing to actress Angelina Jolie when she visited Sierra Leone after the war on behalf of the UN. He was so persuasive in his meeting with her that she provided the necessary funds from her own pocket.

In the final decade of his life, Taziff served as Senior Lecturer in Linguistics at Fourah Bay College, a position he held until his death. In 2008, he briefly taught ethics in linguistic documentation at the University of California, Santa Barbara with Professor Tucker Childs. In 2014 he co-authored Krio Dictionary and Phrase Book with Hanne-Ruth Thompson. Despite his failing health, he continued to conduct research, mentor students, and assist foreign scholars with their research and writing, including American author John Reed, whose novel in-progress includes dialogue in the Mende language among captives newly arrived in the low country region of South Carolina and Georgia.Taziff, affectionately known as “MTK” by his family and many friends, died 3rd May 2018. He is survived by his wife, Hawa, and daughters, Esther, Fatmata, Anita, Mary, and Lydia, and son, Matthew Taziff “Junior,” and his mother, Fataba Kpaka Nya Koroma. He was buried in his home village of Baoma in Gallinas-Perri Chiefdom, Pujehun District.